Dear Husbands (and Wives too):

One of my business cards is tucked into a corner of the mirror above Rita’s dresser in our bedroom. The printed side is facing the glass. On the back are the words. “Love you. XXXO.”  It’s been there five years.

As I was packing to leave on a three-day business trip, it took me about twenty seconds to pull out that card, flip it over, print two words and four letters, and put it on her pillow which she would find later that evening. That miniscule action is still paying dividends five years later.

For the record, three Xs and one O is my go-to signature for just about all the correspondence I do with Rita including notes, emails, greeting cards, and even texts. Where did that come from?I’m glad you asked.

Each time I type or write “XXXO,” the same vocal cadence goes through my head in – believe it or not – the voice of Mel Brooks: Kisses, kisses, kisses. Hug!

You probably won’t remember the commercial, but it’s one of my favorites. And it may have been one of the reasons I got into advertising back in the day. The 1973 spot opens with a grandma wearing a housedress sitting at an old kitchen table attempting to write a letter with various kinds of fruit. Here’s the entire voiceover script. 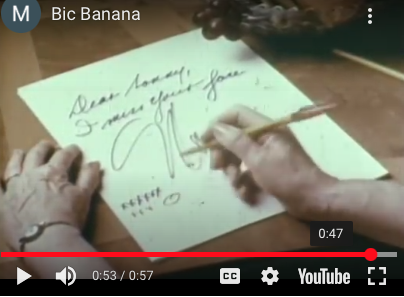 And here’s a link:
https://billyingram.blogspot.com/2013/06/the-bic-banana.html

It’s not romantic, but it’s hilarious. To me, anyway.

Here’s the point. When you leave town, leave a note. Be creative. Be silly. Be romantic. Be short. Be nice. And don’t forget to include lots of Xs and Os.

Of course, a few days apart may not seem like a big deal anymore. Emails, texts, and video chat all seem to make absence less of an issue. But being remembered and appreciated with little notes still brings warm fuzzies.  That’s why that business card is still tucked into the corner of our bedroom mirror.

Oh yeah. When you write those notes, please use a pen or pencil. As Mel Brooks so clearly stated, “If you write with a peach you’ll get a very wet letter. Don’t write with a prune. Words will come out wrinkled and dopey.”

Sign up now to receive notes from Jay in your inbox. Just a few times per month.

Something short and sweet. A discovery. A warning. A reminder. A joke worth sharing.
Maybe an announcement about my schedule or a new product.
No spam. No pop ups. You can opt out anytime.

Something went wrong. Please check your entries and try again.